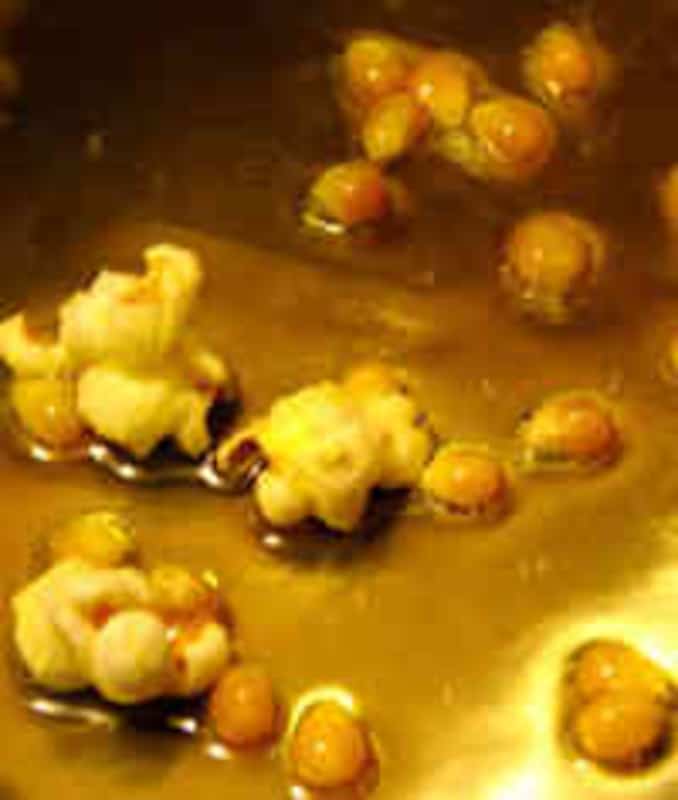 Oil is defined as any chemical substance which at ambient temperatures is liquid and does not mix with water, but combines with solids and other oils. For those who frequent the kitchen and cooking, it is easier defined as an essential cooking ingredient.

The oil used for food preparation is also known as organic oil. It is derived through a metabolic process from natural sources including animals and plants. Organic oils contain lipids, proteins, steroids, alkaloids, waxes and other chemical components.

There is a wide variety of cooking oils, but not all of these may be suitable for popping corn kernels. Oils each have their own characteristics, depending on where it is taken from. Some are more appropriate for popping kernels due to their properties. With the many different choices of cooking oil in the market today, which one is best for popcorn? There are a number of things to consider when picking out popcorn oils.

One of the most important things to consider when choosing popcorn oil is temperature at which oil melts. Smoke point refers to the temperature at which oil will begin to produce fumes, indicating a breakdown in the chemical components. This may also indicate a decrease in nutritional value as well as flavor. Practically speaking, oil with a low smoke point may burn more quickly than others, causing popcorn to burn easier. For example, butter burns at 250 degrees F, while canola oil burns at 375 degrees F. This is why you don't want to cook popcorn in butter. With popcorn oils, it is always good to pick oil which does not have a smoke point that is too low.

As mentioned earlier, oils come from different sources including plants and animals. It may also undergo different forms of refinement. An oil may carry a specific taste with it according to its origin and how refined it is. This taste may stick to popcorn and affect the overall flavor. Ideally, it will be good to pick popcorn oils which do not have a very strong taste or those whose flavor will compliment other seasonings.

Of course, using popcorn oil does not mean overlooking the nutritional value of the oil being used. Certain oils are "healthier" than others because of the saturated fat content found in it. For example, coconut oil which is a popular popcorn oil has very high amounts of saturated fat. On the other hand, canola oil has much less. For those looking for something healthier, canola may be a better option over coconut.

Historically a favorite popcorn oil, coconut oil has dropped out of favor since it is not very healthy. Coconut oil is a popular fat used throughout many tropical regions. It is also a popular ingredient used for coconut oil popcorn cooking methods. Taken from the flesh of coconuts of the tropical palm cocos nucifera, it has been used not just for food, but for medicinal purposes as well. Mature nuts are often easier to work with and yields more oil compared to young coconuts.

A popular popcorn oil is made from peanuts. Also known as groundnuts, they belong to the legume family and are an edible seed contained in a pod. Aside from being a good snack, peanuts are also a source of vegetable fat.

Peanut oil is a common ingredient in Southeast Asian, South Asian and Chinese cooking due to the unique flavor that it carries. It is a popular oil for frying thanks to the high smoke point it has which allows for a crisp outside, moist inside and less oil absorption by the food. These qualities make it ideal for making peanut oil popcorn.

Another popular popcorn oil is canola oil, which is an edible oil normally used for cooking and by many to make canola oil popcorn. It is taken from cultivated field mustard or rapeseed which both belongs to the Brassicaceae family. These flowering leaf vegetables are more commonly known as the cabbage family. This oil was first produced in the beginning of the 70's in Canada. The name canola which was given to the oil derived from these plants is taken from the phrase "Canadian oil, low acid".

A popcorn oil favorite of many enthusiasts is olive oil. Olive oil popcorn has a very distinctive flavor somewhat dependent on the type of olive oil used. As its name implies, olive oil is a vegetable fat derived from olives. It is used throughout the world for numerous purposes including cosmetics, soap production, pharmaceuticals and cooking.

Sunflower oil popcorn is not at all common but some folks swear by it as a popcorn oil. The sunflower is a flowering plant from the Americas that is well known for its large bright yellow blooms that look like the sun. Its seeds are a popular snack food that is nutritious and also a source of sunflower oil.

Not many of us have had soybean oil popcorn since this popcorn oil is rarely use for common cooking. Soybean oil is a vegetable fat taken from glycine max seeds, more commonly known as soybeans. This is a legume that originates from East Asia, cultivated for the edible bean in it.

Categorized as an oilseed it is used for printing, paint and ink production. It is also used for cooking and is a common ingredient in many processed foods such as mayonnaise, margarine, sandwich spreads, snack foods and many more. Soybean oil has gained popularity in the food industry and in many households because of it price and characteristics.

Some popcorn oil is manufactured specifically for popping popcorn. As the name implies, specialty oils are vegetable fats made especially for the purpose of cooking popcorn. Most manufacturers make these oils out of peanut or coconut oil due to the flavor and high smoke point. Canola is also another popular fat used for making specialty oil for popcorn. It is used mainly because of its neutral flavor and low saturated fat content.