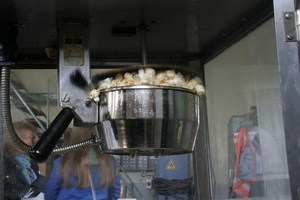 There are countless opinions regarding how to make popcorn. The technology for popping popcorn has come a long way from the time 2,000 years ago when the Native Americans would put the popcorn on flat rocks in a fire. As the corn popped, it would fly into the air. It was a game to catch the popcorn before it hit the ground.

Over the years, with the advent of new cooking technologies, many different methods for popping popcorn have been developed. I'm surprised that someone hasn't adapted a laser to pop popcorn! Some methods gained in popularity and are still in use, others have disappeared from the popping landscape. We will present eight of the most popular methods of popping popcorn, each with its own legion of proponents who believe they know best how to make popcorn.

For each of the methods we will open with the detailed steps we recommend for implementing that method. This will be followed by additional information on the method.

Did you ever try to gain consensus of a group of your friends on what is the best pizza in your town. If so, I'm sure you found it impossible since selecting your favorite pizza is a very personal choice. Gaining consensus on how to make popcorn is also a very personal choice. I'd suggest you may want to experiment with some of the methods we present that you have not yet tried - you might be pleasantly surprised by the results!

There are many ways of popping popcorn. Although many people nowadays use the microwave for making popcorn, a lot of people still prefer the taste of traditional stovetop popcorn.

Popcorn made this way has only sixty calories per cup. Air popped popcorn only has thirty calories for each cup but most folks agree that it just doesn't taste quite as good as traditional stovetop popcorn.

The stovetop method of popping popcorn has been around for a very long time. Pioneers made traditional stovetop popcorn in this fashion, even back when the stoves used coal or wood for cooking and lard was the oil of choice. Fortunately, in this day and age we have gas and electric stoves and several oils better suited for popping and our health.

Numerous companies have endeavored to take traditional stovetop popcorn to the next level by replacing the common pan with a specialty pan designed for popping popcorn. These specialty stovetop popcorn poppers provide a mechanism to "stir" the kernels as they pop. The purpose of which is to reduce the number of unpopped kernels and eliminate any burned popcorn.

The design of the electric popcorn popper today is much better than the ones made years ago. Most of poppers have an automatic stirrer placed in the bottom of the popper. This spins continuously so that all of the kernels pop, making it very economical. The stirrer also ensures that the electric popcorn doesn't stick to the bottom of the popper and burn.

The machines made for popping popcorn with hot air have a heating element and a fan which blows extremely hot air through the popcorn. This heats up the moisture in the kernel causing steam that eventually causes the kernel to explode.

The flakes from air popped popcorn are very healthy since they have no oil on them. They are also very light and fluffy since they don't come in contact with any steam like in stovetop popcorn.

In 1967 Amana introduced its domestic Radarange microwave oven, marking the beginning of the use of microwave ovens in home kitchens. At this time most folks used their stovetop for popping popcorn. The sales were initially slow due to the high cost of the oven, but as prices dropped rapidly, by 1976 the microwave was present in nearly 60% of U.S. households making it more common than the dishwasher.

During this same time period Pillsbury registered a patent for popping popcorn in a microwave. The early bags were not an instant success since they had numerous problems. But by 1984 the microwave popcorn bag had been perfected and its popularity took off. Today the majority of the popcorn consumed is microwave popcorn. And today the microwave can be found in every kitchen as well as most offices, hotel rooms, even RVs.

If you went camping since the sixties you probably have fond memories of making Jiffy Pop popcorn on a grill or open fire. Jiffy Pop is perfect for popping popcorn when you're away from your kitchen or handy microwave.

Jiffy Pop popcorn has been a staple in American households for years. It was created by Fred Mennen in 1958. It was introduced to grocery stores everywhere in 1959 by ConAgra Foods. It was marketed as the "fun family treat".

Most popcorn connoisseurs have foregone the stovetop, air popping and microwave methods of popping popcorn. Those ways to make the tasty treat just don't have the true flavor that a good, old fashioned popcorn machine can provide. Nothing tastes better than hot, fresh popcorn right out of the machine.

A lot of people think that a popcorn machine is expensive. Sure, if you are looking to buy one that is the same size in a movie theater, it'll cost a small fortune. However, there are some really affordable models on the market today.