Best Popcorn Popper For You 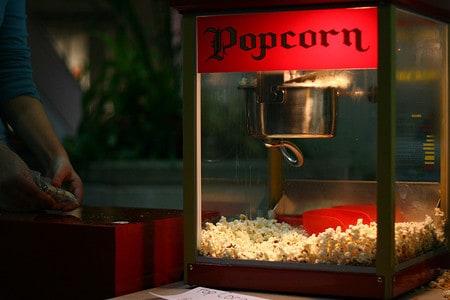 A variety of companies have designed a popcorn popper for the different methods of making popcorn. As you would suspect, some work better than others. In this section we'll provide information on the most popular popcorn popper of each type.

For each of the ways to make popcorn we will provide a recommendation of what we feel is the best popcorn popper(s) for that particular method. There will also be additional information on all of the poppers we recommend.

We will not recommend a popcorn popper for the "Traditional Stovetop" method of making popcorn since you will just use a pan you already have laying around the house. Similarly, the Jiffy Pop method already comes with the popcorn popper as part of the product.

One popcorn popper that is a fairly simple improvement on just using a regular cooking pot on the stove is the stovetop popcorn popper. These have a stirring mechanism that rotates around the bottom of the pot moving the kernels and distributing them and the oil evenly. This action decreases the number of unpopped kernels known as "old maids". It also keeps the popped flakes from sticking to the bottom of the pan and burning.

The crank causes the stirring rod at the bottom of the pot to rotate moving the kernels and distributing them and the oil evenly. This action decreases the number of unpopped kernels known as "old maids". It also keeps the popped flakes from sticking to the bottom of the pan and burning.

A popular electric popcorn popper is the Stir Crazy popcorn popper by West Bend. It has a motorized stirring rod to eliminate "old maids" and prevent popped flakes from burning. The popper uses oil to heat the kernels so the popcorn taste similar the that made on the stovetop.

There is a clear cover so you can have fun watching the popcorn popping. In the top of the cover is a "butter well" that allows you to add butter to the popcorn as it pops. This cover can also be used as a good size serving bowl. One feature that's unique to the Stir Crazy popcorn popper is that it automatically turns off when the popping cycle is completed. This prevents burning if you get delayed in emptying the popper.

In the late 1970s the first popcorn popper using hot air debuted. The hot air popcorn popper has a popping chamber that holds the kernels to be popped. At the bottom of this chamber is an opening, covered by a screen, where heated air is blown up through the kernels by a fan. This tosses the kernels about, but more importantly, heats them up.

As a kernel heats up the moisture inside turns to steam and builds up pressure until it finally explodes to form the popcorn flake. Since the flakes are much lighter than the kernels they get blown out of the chamber and flow down an exit chute into a waiting bowl.

In 1978 Presto introduced a popcorn popper that used hot air rather than oil to pop the corn. This resulted in popcorn that was more healthy due to the lack of oil. The latest version of the PopLite popcorn popper can make more than 4 quarts of delicious popcorn in about 3 minutes. Cleanup is also very quick since there is no oil the mess with.

If no oil is used the microwave popcorn is very healthy, similar to air popped popcorn. The microwave popcorn popper pops very efficiently and leaves very few unpopped kernels. It's very easy to keep the popper clean, especially if you don't use oil. The one downside is that it only pops about 3 quarts of popcorn in one batch.

The Presto PowerPop is a popcorn popper that's designed for use in the microwave. It has a PowerBase concentrator and a PowerCup concentrator that work together to focus the microwave energy so effectively that virtually every kernel pops. It can make 3 quarts of popcorn in less than 3 minutes.

Many popcorn enthusiasts that consume copious amounts of the tasty snack have moved up from their common stovetop, hot air or microwave popcorn popper to a popcorn machine. Most believe the smaller poppers just don't have the true flavor that a good, old fashioned popcorn machine can provide. Nothing tastes better than hot, fresh popcorn right out of the machine.