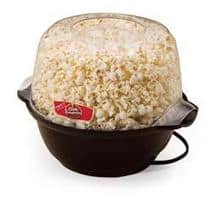 Many people prefer to use an electric popcorn popper when popping popcorn. These can be much easier to use than making popcorn on the stovetop but the electric popcorn tastes very similar since both poppers use oil to pop the corn. Most aren't very expensive and last for years.

The following is our recommendation for the best way to make popcorn using an electric popcorn popper. For additional useful information on this method continue reading after the recommendation.

We suggest the following steps when popping popcorn in an electric popcorn popper:

In addition to the stirrer rod another great feature is that many of these products require less oil than needed for other popping methods. This results in a healthier snack with less calories, fat and sodium. That is unless you add butter and salt after the corn has been popped. Naturally, adding anything to the popcorn increases the calories and fat content of the food.

Some electric popcorn poppers today may even have a butter melting feature. You simply put some butter into the tray and the popper melts the butter for you. As the popcorn pops the butter melts and drops down onto the popped corn. Some people feel that this makes the popcorn soggy. It is also often reported that the butter doesn't fully melt leaving a bit of a mess at the top of the popper. As with all "Automatic Buttering Schemes", we strong discourage their use in favor of simpye melting the butter in the microwave.

Most electric popcorn poppers nowadays have heat-free handles. In the past, people needed to use potholders just to open the vessel. The new design makes the products much safer to handle because you won't get burned.

Many of the electric popcorn poppers available today have attached popcorn bowls. The lid actually doubles as a serving bowl. You simply turn the popper over and the electric popcorn fills the bowl with your tasty snack. It's quite an ingenious feature that will also cut down on your clean up time.

Finally, a common electric popcorn popper feature is an automatic shutoff. As soon as the popcorn has popped, the machine turns itself off. This is a great feature which makes these products much safer than they were in the past.