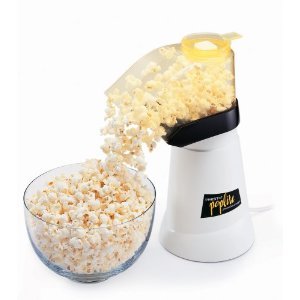 The machines made for air popped popcorn have come a long way over the years. In the past, air poppers were often ineffective and not very economical. Oftentimes, there would be many kernels wasted because they did not pop. It took as long as ten minutes to air pop four cups of popcorn.

It's not that difficult to understand how air poppers make air popped popcorn. The popper is plugged into the electrical outlet which turns on the machine's heating element. This will also start a fan which blows air through the heating element, heating the air significantly. The hot air then blows up through the kernels heating them and also moving them around inside of the machine. As the kernels heat up steam is created inside each of them increasing the pressure and eventually causing the kernels to explode.

We suggest the following steps when popping popcorn in a hot air popcorn popper:

Popcorn is Fluffy and Dry

Has a Measuring Cup / Butter Melter

The top of most air popcorn poppers hold a cup that can also be used to measure how many popcorn kernels to use in the popper. It's nice that it's always there and you don't have to search for a measuring cup in your kitchen. It is very important, however, that you remember to replace the measuring cup in the lid before you turn on the popper.

Many air poppers have a small cup on top for melting butter. It's not clear that this is really a "feature". Butter gets very hot once it is melted. Unfortunately, many of these poppers have plastic cups for the butter and they crack from the heat after using it for a few months. We recommend that you melt butter in the microwave so the cup will not break.

An air popcorn popper is very efficient when it comes to making popcorn. Normally there are very few "old maids" (unpopped kernels) left in the popping chamber.

Since no oil is involved, the setup and cleanup of the air popcorn popper is very simple. The popping chamber just needs to be dumped out if there are unpopped kernels in there. The cover and butter melter can be cleaned with warm soapy water. If the butter melter is not used, just wiping the unit down with a dry cloth is all that's required.

The air popped method is one of the healthiest ways to make popcorn. There is no added oil or salt, unless you do so after the corn has been popped. For a full cup of air popped popcorn, there are only thirty calories. That's a ridiculously low number of calories for a tasty, filling treat.