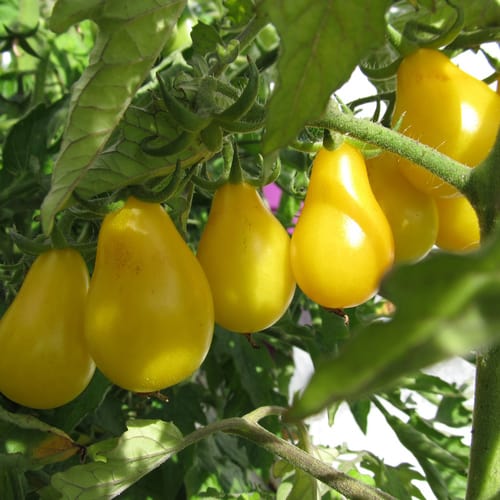 Pear tomatoes originated in Europe during the 1700's eventually becoming popular throughout both the United States and England. It was used mainly as a flavoring agent for soups.

The first yellow pear tomatoes were recorded in the Synopsis Planetarium in 1805 by taxonomist and biologist Christiaan Hendrik Persoon. In 1825 this was among the crops farmed at The Hudson Bay Company in Fort Vancouver and was recorded to be grown in the United States in 1847.

By 1863, the Yellow Pear was among the 100 varieties of tomato seeds to be sold in the western territories. Oscar Will & Co. introduced the Fargo Yellow Pear in 1934 and in 1983, Beam's Yellow Pear was made known to the Seed Savers Exchange (SSE). By 1998 25 different Yellow Pear varieties were being offered by the SSE.

This indeterminate grower can be identified by its large bushy plants with regular leaves. It usually yields lots of fruits until frost arrives. The tomatoes are small in size measuring about 1 to 1 1/2 inches (25-38 mm).

These are of the cherry variety, but are shaped like tiny pears and usually bright or golden yellow in color. The Yellow Pear may be small, but it packs a punch flavor wise. Deliciously sweet and zesty yet mild, these are often eaten fresh as a snack or included in salads.

It may also be used for preserving, pasta and salsa. Other than its delicious taste, it also adds to the aesthetic value of a dish, with its bright color and unique shape.

Best planted during the mid season the plant grows vigorously. It is best supported with stakes or cages to help promote fruit production. The tomatoes are often ready between 69 to 75 days and are resistant to verticillium wilt and fusarium races 1 and 2. Many farmers markets carry Yellow Pear tomatoes when it is in season, however seeds may also be bought at plant stores and through seed catalogs.