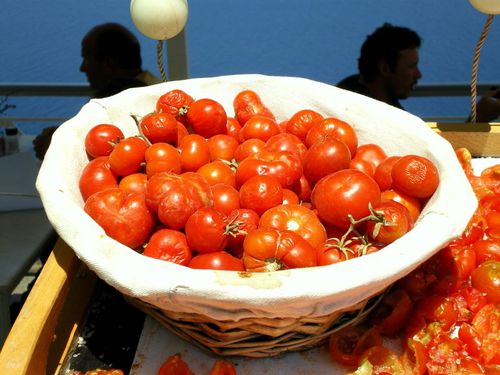 Often compared to a cherry tomato, the Santorini Cherry is a very small plum-shaped cultivar originating from the Island of Santorini, Greece. It is a rare tomato variety considered to be a part of semi-wild tomato subspecies. The Santorini seeds were first introduced in Greece in 1818, by a Kapoutsinon monk named Fragkiskos.

A local legend tells that the first tomato seeds came from Suez. Seafarers from Santorini used to drop by Suez for commerce and trading of goods. It was during a visit to Suez that the mariners brought the seeds and began growing the tomato on the Island. However, it was documented that the organized cultivation of the Santorini Cherries first started in 1875. The great thing about these tomatoes is that they have stayed original to this day and never have been hybridized with another variety.

Santorini is a one-of-a-kind tomato noted for its small size and rich flavor. The tomatoes are very small that people sometimes believe them to be actual cherry fruits. The best Santorini Cherries are unique and exclusively produced in Greece. Incredibly, these tomatoes survive in Greece's atmosphere of scant rain showers and high temperature, with the weather conditions assisting in the growth of the tomatoes.

According to the local tongue, Santorini tomatoes are often called "tomataki". During the 19th century, these tomatoes made Santorini a prosperous tomato paste production capital. These tomatoes are available during the summer months when the fruits are entirely matured.

Santorini Cherries are characterized by their high sugar content and reduced acidity. This is due to the volcanic soil where Santorini Cherry seeds are often planted in. The tomatoes are juicy, thick-skinned unlike regular cherry tomato varieties, and often used as paste or puree in cooking.

A famous dish that uses Santorini tomatoes is the tomatokaftedes or tomato balls. The small tomatoes are soaked in herb-infused oil. They are also made as fritters with their sweetness coming through in every bite. Moreover, Santorini Cherries are used as a delicious red sauce in casserole dishes and as Tomolive garnishes in martinis.

Consumers and tomato cultivators gain immense benefits from the Santorini Cherry. Its plants grow in abundance more than its indeterminate tomato counterparts. Also, they quickly mature and carry tastier fruits, albeit small, than most tomato hybrid types.