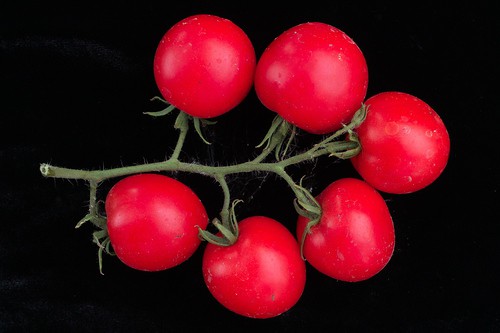 Salads, can be eaten fresh

Information for Fourth of July

The Fourth of July is a hybrid type of tomato developed by W. Atlee Burpee & Co. The company retains its exclusive rights to this day. The variety's heritage is a trade secret like most hybrids. The name comes from its ability to ripen by the Fourth of July which is Independence Day in the United States. It is sometimes dubbed as the "Independence Day tomato."

It is also one of the earliest non-cherry tomato varieties. Fourth of July plants have been believed to produce medium-sized tomatoes in early July even in areas that have brief growing seasons.

The Fourth of July variety was developed for its disease resistance, reliability, and heavy production. It grows standard-shaped fruits that provide above average flavor. During the Tomato Tasting Reports at the University of California in 2004, the Fourth of July was awarded the winner in the Salad and Slicing category at the University of California in Davis. However, even with this recognition, Fourth of July tomatoes are prone to cracking and have heavily thickened skin.

Fourth of July plants bear 4-ounce (113 g) vibrant red fruits that mature 55-68 days after transplant. Typically, growers of this plant variety sow the seeds by May 15 so as to gather already-ripened tomatoes by early July. In proper weather conditions, this is a productive tomato plant that bears continually from the blistering warm months up to first frost.

Great as a slicer, these tomatoes are regularly used in salads. They can also be consumed plain. They have a delightful combination of sweet tanginess with a bit of succulence.

Fourth of July tomatoes are grown in many parts of the United States and are mostly available at annual plant sales. Planting them in containers is perfect as they grow only under four feet (1.2 m) tall. Fourth of July tomatoes can also grow indoors during early June or late July in order to have the fruits picked by early fall.